The Danger of Ignoring the Past and the Wisdom of Economists

"Attempts to carry out economic reforms from the monetary side can never amount to anything but an artificial stimulation of economic activity by an expansion of the circulation, and this, as must constantly be emphasized, must necessarily lead to crisis and depression. Recurring economic crises are nothing but the consequence of attempts, despite all the teachings of experience and all the warnings of the economists, to stimulate economic activity by means of additional credit." 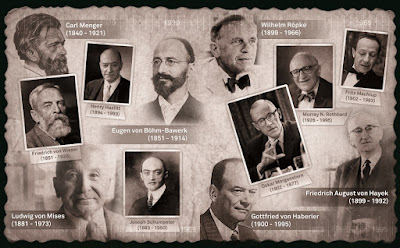 As Ludwig von Mises concluded his 1934 Preface to the English edition of his book, he emphasized once again the danger of increasing credit expansion, which will eventually end into economic crisis. I wonder why after more than eight decades and with the accessibility of information in our time, the wisdom of the Austrian school of economics is still largely ignored by academic institutions and policy makers. I cannot avoid but to think that perhaps the political control of money is really addictive on the part of government officials and those who benefit from the system. Perhaps, it is really such a great temptation that is too difficult to resist. And so regardless of setting up parameters to avoid the abuse of this power, history teaches us that government's control over the monetary system has always been abused to the detriment of the people's welfare.

Posted by RChavez at 6:12 PM No comments:

"The dislocation of the monetary and credit system that is nowadays going on everywhere is not due . . . to any inadequacy of the gold standard. The thing for which the monetary system of our time is chiefly blamed, the fall in prices during the last five years, is not the fault of the gold standard, but the inevitable and ineluctable consequence of the expansion of credit, which was bound to lead eventually to a collapse. And the thing which is chiefly advocated as a remedy is nothing but another expansion of credit, such as certainly might lead to a transitory boom, but would be bound to end in a correspondingly severer crisis."

"The difficulties of the monetary and credit system are only a part of the great economic difficulties under which the world is at present suffering. It is not only the monetary and credit system that is out of gear, but the whole economic system. For years past, the economic policy of all countries has been in conflict with the principles on which the nineteenth century built up the welfare of the nations. International division of labour is now regarded as an evil, and there is a demand for a return to the autarchy of remote antiquity. Every importation of foreign goods is heralded as a misfortune, to be averted at all costs. With prodigious ardour, mighty political parties proclaim the gospel that peace on earth is undesirable and that war alone means progress." 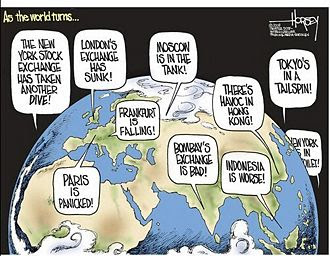 The role of the depreciation of local currency exerts big influence in an attempt of any nation to boost its export industry and to reduce importation of foreign products. Ludwig von Mises is clear at this point that this is one of the short-term effects of currency devaluation. However, such a stance is inimical to the interest of countries that rely more on their exports to strengthen their economy. If Mises' description therefore of the situation of global economy during his time is also appearing in our time particularly in relation to the way nations see the international division of labor and the importation of foregin goods, it is no wonder that we also have been hearing in our time the message that progress can only be obtained by means of war. In fact, not a few analysts are making a parallel between what's going on right now in global economy with the period prior to WW1 and WW2.

The two paragraphs above tell us about the interlocking connection among the condition of money, credit, and the economy. In particular, Ludwig von Mises talks about the dislocation of money and credit due to credit expansion. He even told us that "It is not only the monetary and credit system that is out of gear, but the whole economic system" due to the abandonment by the policy makers of his time of the principles that made capital formation and growth possible during the 19th century. Reading this, I see Mises as prescient as if he is also describing our time.

What is tragic is that further credit expansion is perceived as the solution while ignoring the fact that it was the source of economic malaise in the first place. For majority of policy makers today, this faulty idea still remains. Yes, as we've seen in the formation of two recent bubbles (tech bubble and housing bubble in periods prior to 2000 and 2008 respectively), this credit expansion have resulted into "transitory boom," which will unavoidably lead to an economic collapse far worse than the two previous ones.
Posted by RChavez at 5:57 PM No comments:

The Superiority of the Gold Standard

"Gold is not an ideal basis for a monetary system. Like all human creations, the gold standard is not free from shortcomings; but in the existing circumstances there is no other way of emancipating the monetary system from the changing influences of party politics and government interference, either in the present or, so far as can be foreseen, in the future. And no monetary system that is not free from these influences will be able to form the basis of credit transactions. Those who blame the gold standard should not forget that it was the gold standard that enabled the civilization of the nineteenth century to spread beyond the old capitalistic countries of Western Europe, and made the wealth of these countries available for the development of the rest of the world." - (Source: Ludwig von Mises, The Theory of Money and Credit, 1953, p.19)

What does Ludwig von Mises want to communicate through the above passage? How would you interpret it? And how is it relevant to the existing monetary system?

How about our existing monetary system? Is it not under political control? Many people are not aware that the existing fiat currency is not actually an outcome of free-market monetary system; it is a product of the policy of interventionist government. Our money therefore is not a market money, but a political one. This explains the existing chaos both in the economic and monetary affairs of nations for these two are inseparable; money is the lifeblood of the economy. Once you tamper with it, you are overturning the foundation of society. John Maynard Keynes put it this way:

“There is no subtler nor surer means of overturning the existing basis of society than to debauch the currency. The process engages all the hidden forces of economic law on the side of destruction, and does it in a manner which not one man in a million is able to diagnose.”

Posted by RChavez at 5:32 PM No comments: